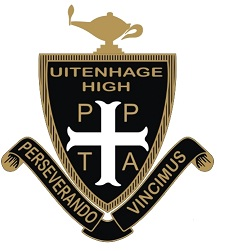 UHPPTA is the brain child of a group of past learners from the school who arranged their class group reunion. The group gathered in 2010 to what was to be their reunion – soon it culminated in the establishment of an alumni organisation. UHPPTA’s core business activity is providing bursaries to deserving, financially-needy learners.

To support and underpin the overall vision of Uitenhage High School, which is: to be an educational institution of excellence.

UHPPTA has identified 5 pillars that would constitute the road-map to realising this vision:

Since our inception in 2010, UHPPTA have distributed bursaries to deserving, financially needy learners totalling hundreds of thousands of rand. We are immensely proud to report that the first recipients of the UHPPTA bursaries graduated in April 2015. This initiative has grown from awarding bursaries to 4 matriculants (2010) to also recognising the accomplishments of the current crop of Uitenhage High learners. UHPPTA awards the efforts of Top 3 Grade 8-11 learners, as announced at the school’s Annual Awards Ceremony, by sponsoring their school fees for the following academic year. Through its International Scholarship Fund, driven by an alumnus based overseas, UHPPTA has also managed to fund the studies of a number of Information Technology students – former Uitenhage High learners. This initiative also comprises a mentorship programme, aimed at guiding the beneficiaries during and beyond their years of study.

UHPPTA launched its New Learner Transitioning (NLT) Programme in 2017. The rationale behind this programme is to assist the new in-take at Uitenhage High School with adapting to their new environment. Learners often battle with the move from primary school – where many of them served as leaders – to being regarded as the juniors at high school level. This “diminished status”, coupled with greater volumes of work and turbulent teenage years, often result in academic under-performance, which could lead to learners dropping out of school. Hence, whilst much focus is placed on overcoming possible deficiencies relating to the Mathematics and Home Language curricula, a substantial portion of the programme is devoted to equipping learners with the requisite knowledge, skills and values to adapt and successfully navigate their high school life.

UHPPTA has committed itself to the development and upskilling of the Uitenhage High staff. It is our considered opinion that an investment in these adults (teaching, admin and support staff) will, over time, translate in improving the quality of education at our Alma Mater. This, in turn, should result in our learners performing at their optimum level in all spheres (academically, sport, culture, spiritually, etc.).

Apart from successes obtained with the mentorship programme, through which a support staff member was assisted in furthering her studies, the Teacher Incentive Initiative (TII) was introduced n 2017. In terms of this initiative, educators are recognised and rewarded for the results obtained during the Grade 12 final examination session. In an endeavour to promote high-quality education, additional recognition is reserved for distinctions obtained by learners across the various subjects.

Some of the projects UHPPTA has embarked on pertaining to the infrastructure needs of the school, amongst others, include the installation of benches on the school’s playground, the upgrading and expansion of ablution facilities at school, as well as contributing financially to the creation of additional office space and the beautification of the school garden.

For a good number of years, UHPPTA has carried the cost of the Bulk SMS system used by the school to improve communication with the parents.

UHPPTA has identified the erection of a multi-purpose hall for the school as its flagship project. Progress is this regard has been very slow. It was decided, therefore, to donate R100 000 of the money collected for the school hall to a more pressing need – the building of additional classrooms at the school. We are confident that this sizeable contribution will assist the school greatly in realising its goal.

We are acutely aware of the fact that our organisation cannot exist and prosper in isolation. As such, we regularly collaborate with various stakeholders, including tertiary institutions, alumni organisations of other schools, the private sector and other community organisations, to the benefit of our Alma Mater. Objectives such as the introduction of skills development programmes and creation of employment opportunities enjoy high priority within the organisation.

5. FURTHER ASSISTANCE TO THE SCHOOL

This pillar represents all other forms of assistance we are able to offer the school not stipulated in the first four pillars, for example, helping in coaching of sports codes, assisting with invigilation duties during examination, etc.

• A shortage of alumni actively assisting in promoting the organisation

• Broadening the leadership base of the organisation